Posted at 11:37h in Uncategorized by Asja 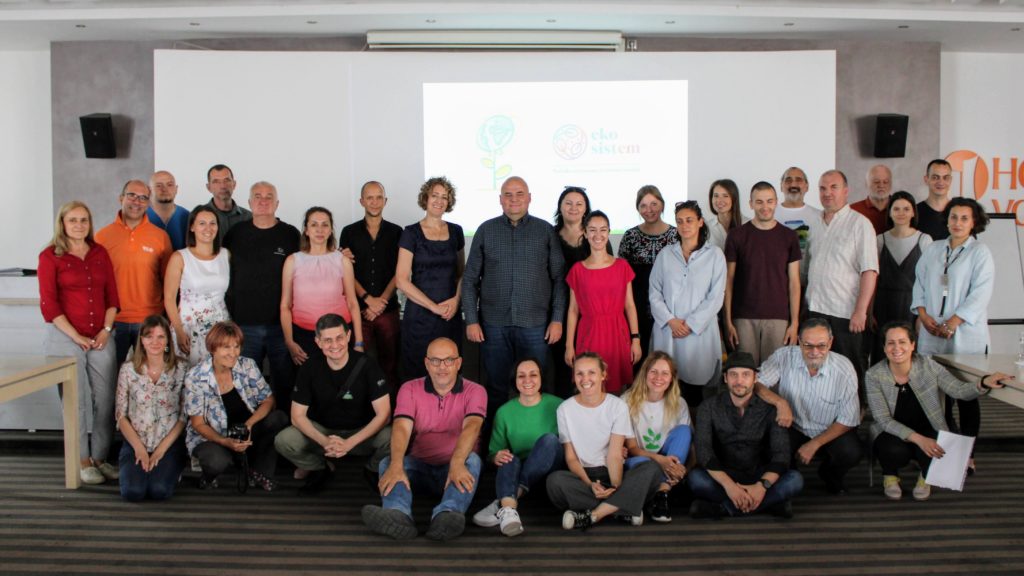 At the beginning of the second cycle of ECO-SYSTEM support for CSOs in the area of environmental protection, from July 11 to 13 in Zrenjanin, an introductory training and contract signing ceremony was held between The Young Researchers of Serbia and 13 organizations whose projects were supported.

The contract signing ceremony was attended by project teams in front of 12 networks supported in this cycle, and the contract was ceremoniously handed by Tanja Petrović, executive director of the Young Researchers of Serbia.

After the contract signing ceremony finished, introductory training started, aiming to raise the capacity of CSOs to implement their projects successfully.

On the first day of the training, CSOs presented their projects and changes that they want to achieve through their project, and synergy was achieved through the mapping of common activities that will lead to further networking among organizatons.

The second day was dedicated to the main elements of the project cycle related to successful project management, as well as mapping planned gender activities and achieving synergy when it comes to the gender component of the supported projects. At the end of the day, representatives of the Green List of Serbia, Green Chair, and Afforest Vojvodina Network talked about the ways of managing formal and informal networks and their experiences, as well as the advantages of forming a network and what contribution the network can make to the members, and the members to the network itself.

On the third day, the emphasis was placed on the monitoring of environmental policies, as an activity that is an integral part of the ECO-SYSTEM program with the aim of supporting and accelerating reforms in environmental protection in the Republic of Serbia by more actively involving civil society organizations and other actors. The end of this day, and at the same time the introductory training, was left for a session on conflicts in society, preventing and fighting corruption in the field of environmental protection.

The Introductory Training was also an opportunity for civil society organizations to connect through common themes and territories where they implement their activities, and thus strengthen their field of action. Networking and support stood out not only as conclusions but also as the strongest impressions of this training.

Aware that the process of reforms in the environment is serious and long-lasting, and that without the cooperation of civil society and institutions, with constant work with citizens, the current situation cannot be improved, the Young Researchers of Serbia, with the support of Sweden, included in the ECO-SYSTEM program all those elements that are important to strengthen existing capacities but also to upgrade knowledge, skills, policies and practices of cooperation.