Posted at 12:12h in Environmental Protection by Asja 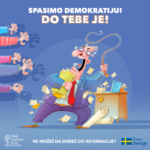 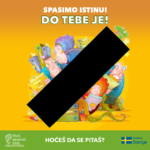 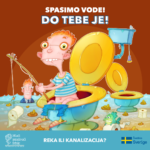 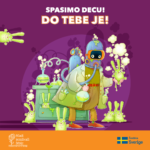 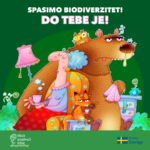 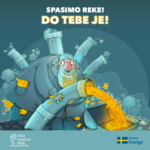 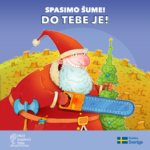 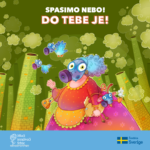 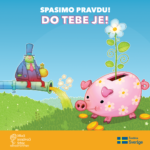 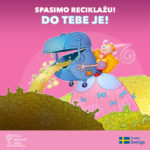 In October last year, the first messages of our “Let’s save the world – it’s up to you!” campaign appeared on social networks. The first visual shows an officer who “protects” important documents from citizens with a whip and was the result of cooperation of the Young Researchers of Serbia with Dobrosav Bob Živković. Although cartoon-animated and with a healthy dose of “prickly” Bob-style humour, these images also show the ugly reality of the Serbian environment.

From the lack of transparency and exclusion of citizens from the decision-making process – through polluted cities, rivers, and air, to the destroyed nature and endangered animal species – we have pointed out ten burning environmental problems. Apart from Facebook and Instagram, we were also in the media and pointed out some specific problems that we should not ignore. You can read about them via the following links:

Still, we decided to go a step further and motivate citizens to get involved in our campaign by looking around, noticing such problems in their environment and demanding solutions.

Pictures of the environment can be found on Instagram under the hashtag #domenejeizazov. The hashtag contains pictures from all over Serbia. This mosaic composed of your stories showed us that Serbia is covered with rubbish. There is no corner untouched by this problem – rubbish and illegal dumps are in big cities, just below the mountain tops, in the fields where food that ends up on our plates is grown, and in lakes and rivers. What does it tell us? Apart from the fact that rubbish is the most visible problem, it also shows low awareness of the need to preserve nature in Serbia.

While a large part of Europe deals with complex issues of the circular economy, efficient recycling, switching to natural energy sources, and nature conservation, in Serbia we are still discussing basic things, such as where to throw rubbish. On the other hand, you also noticed the “invisible killer” –polluted air – which has become a burning topic in the country in recent years.

In the end, we discovered that there are many people in Serbia who care about the environment and want to initiate change. Among them are citizens of all generations and interests. So, what is the problem? You told us yourself – you feel that there is no one to listen to you and help you. The competent institutions mostly do not care, and people who feel the need to start something on their own often do not know where to start.

Although a single programme cannot correct everything that is wrong, through the ECO SYSTEM we wanted to take the first step towards change – and changes do start when we change the relationship we have, both with nature and with each other. The “Let’s save the world – it’s up to you!” slogan also implies enthusiasm and a reminder that it is up to us to take action in the right direction. This does not mean that an individual should (and can) solve all systemic problems. This means that we have the opportunity to react and remind the authorities of their work when reforms lag or the environment gets worse.

In the coming months, the ECO SYSTEM programme is open to all of you. We are here to connect you with citizens’ associations dealing with environmental protection, or to invite the authorities together to solve the problems that you have drawn our attention to within #domenejeizazov.

Through the Coalition 27 reports, which monitor the progress of environmental reforms, we will keep you abreast of the state of the environment in Serbia and all the steps forward (and backward) that are part of the changes.